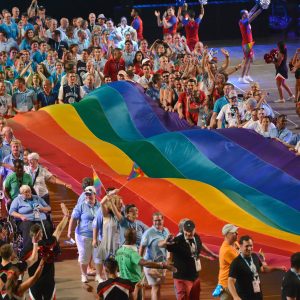 The city will next month submit its final bid for the nine-day sporting and cultural event, with high profile backers including the Equal Opportunities Commission

The Equal Opportunities Commission and the “father of Lan Kwai Fong” Allan Zeman are among a number of high-profile backers to throw their support behind Hong Kong’s bid to host the 2022 Gay Games.

Other supporters of the city’s effort to hold the event include businesswoman Gigi Chao, Goods Of Desire co-founder Benjamin Lau, gym chain Pure Fitness and hotel groups Accor and the Mandarin Oriental, according to organisers.

Hong Kong’s bid for the games was warmly received by the Federation of Gay Games in Sydney last week, where a four-person delegation showcased the city before they are expected to submit a final application for the event next month.