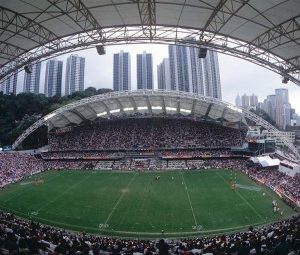 “With the 2022 Hong Kong Gay Games less than two years away, organisers are confident that the next edition of the quadrennial event will be a success.

Despite the challenges of the Coronavirus pandemic and ongoing unrest in Hong Kong, a recent online webinar saw the two year countdown for the world’s largest LGBTQ sports competition and arts and cultural event.

With events to be centred on the Hong Kong Stadium (pictured below), 36 sporting events are planned, including traditional football, wrestling, volleyball and figure skating as well as sports more common in Asia such as dragon boat racing, dodgeball, eSports, and trail running.

An outdoor Festival Village will be opened near the harbour in central Hong Kong that will showcase art and cultural events and exhibits as well as performing arts events including daily performances by bands, dance groups, and vocalists that have been associated with the Gay Games for many years, according to literature released by organisers.”